We have now lived in London for over thirty years, but I can still remember the day we moved in.

We packed up our belongings in the Leicester house and the furniture was not due to arrive until the following day. Therefore we brought sleeping bags and a few necessary items and all camped in the living/dining room space.

We had no curtains at the windows. I remember looking out at the two large blocks of flats visible from our back window. I found it hard to believe that there were so many windows lit up at night and to reflect that behind those windows would be so many families – all people sharing the same air. 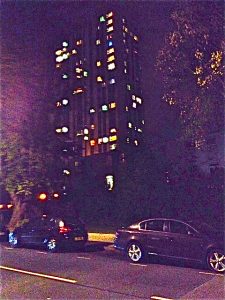 Then another huge surprise was in store!

The house began to tremble. Huge searchlights swept the sky.

Image courtesy of gameanna at FreeDigitalPhotos.net

We looked out of the back window. Down below – on the main line into Euston, great engineering works were being undertaken. 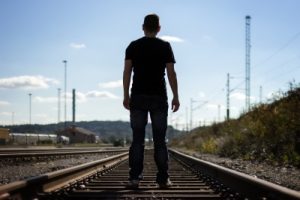 Image courtesy of papaija2008 at FreeDigitalPhotos.net

Huge rail-moving equipment was in operation.

Image courtesy of Supertrooper at FreeDigitalPhotos.net

This was of great interest to everybody at first, but then we realised that this work was probably going to go on all night.

To add to the complication, it was such a hot night, that we had to keep the windows open. The noise all that night was tremendous. Later we discovered from our new neighbours that such a large operation hardly ever happened and we only saw something similar on a few occasions during the eight years that we lived in that house.

Well at least it was a memorable welcome to London!