When we moved to London, I was overwhelmed by all the amazing things one could see and do in the capital. In earlier days I thought that I would not like to live there, but by 1983 I was truly ready to settle in (and hopefully never to move away.) We were both brought up in Surrey, but up until then, in our married life we had lived in SIX different homes, including one in Western Malaysia.

As I have probably said elsewhere, the moment Sam arrived in London, he felt at ease. I think he relaxed because he saw so many people of different colours, including people who looked just like him. Within three days, he had worked out which bus to take. Actually his school was within walking distance and after the first day he wanted to walk there alone.

D. often travelled abroad for his new post for the church denomination and therefore I had to do quite a lot of exploration myself. Jah was still young, so he had to come along. We saw many wonderful things.

I very much doubt whether Jah will remember two cheerful sculptures that we discovered at Somerset House, but they are joyful artistic expressions that I will never forget. The sculptor/artist was Keith Haring. Sadly he died very young, as a victim of the Aids epidemic that was rampant in the 1980s. 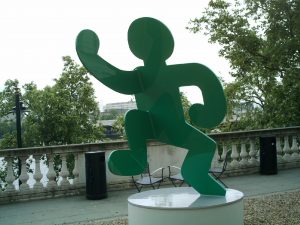 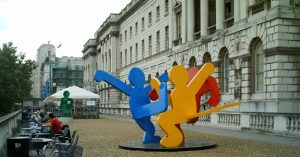 I know that we took both boys to Science and Natural History Museums, although I am pretty sure we had to pay in those days. It is much better now that children and families are able to enjoy all the national treasures free of charge and can therefore return again and again – as indeed people do, judging by the huge queues, especially at Half Term. 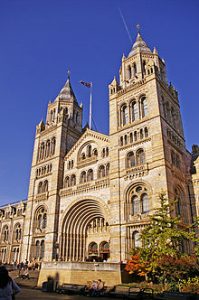 We went to the Tower of London. Being boys they spent a long time staring at various coats of armour. They also enjoyed the humorous commentary by the guides. 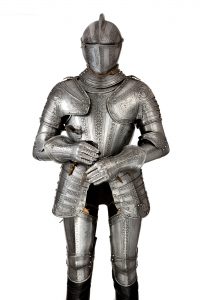 We went to see the Lord Mayor’s Show and visited the Museum of London where we were able to gaze at this magnificent carriage. 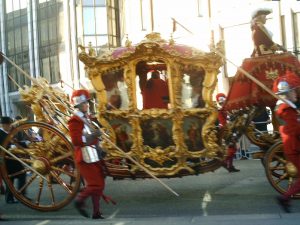 Once, when we had walked through the whole length of the Burlington Arcade, we saw a notice that said “It is forbidden to whistle or sing in the Arcade”. Jah had walked right through the Arcade singing a merry song before we reached the notice. When he saw the notice he was very worried. He kept looking over his shoulder, but calmed down when no “policeman” came to arrest him!

I remember also that Jah had been very impressed by the severity of a notice that threatened all sorts of dire punishments if anybody dared to chain their bicycle to railings in “posh” sreets.

After-school clubs were only just beginning to start when we moved to London, but since we were living in the Borough of Camden, Jah was entitled to attend two weeks’ summer play scheme at Coram’s fields. This was a really good experience.

I’m not sure whether we took the boys to the Notting Hill Carnival, but Sam went every year with his friends as he grew older. (The picture below was taken at Carnival in Tobago.) 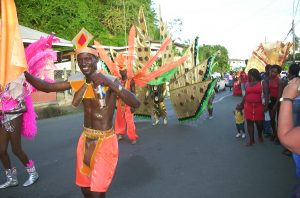 The inventiveness of costumes that are made around the world is so impressive.

These are just a few memories of our early days in London – the city that both Sam and Jah were born in.

Since I have covered most of Sam’s and Jah’s childhood, from now on I’ll write blogposts once a month – usually on the first Monday of the month. There is plenty more to say on the theme of Adoption Reflections and a Multiracial family. . .