“We are Family” – One race – Olympics – a Multiracial/Multifaith World

This is not meant to be a political blog. It is written in the main about our personal experiences as a multi-racial family. It is impossible to ignore prejudice in society. However, it is also good to remember when prejudice can be overcome.

Sometimes I think that short accounts of experiences, almost ‘vignettes’ can speak volumes to a person. Today I offer you two.

As I write in August 2016, many people around the world have been enjoying watching the achievements of young people at the height of their physical ability, as they take part in the Rio Olympics.

I only learned via Facebook about the great significance of the first Olympic medal for a black participant in the Swimming event. I read that in the USA in the 1960s and 1970s it was not possible for black and white swimmers to swim in the same pools. There is an infamous video in existence of a Motel manager in the US as late as 1964 pouring acid into a swimming pool in order to force the black swimmers out of the pool. (An almost unbelievable act.)

An injustice like that is impossible for oppressed people to forget. And therefore how sweet was the gold medal obtained by Simone Manuel this year in the Women’s 100 metre freestyle!  (See the extract below.) 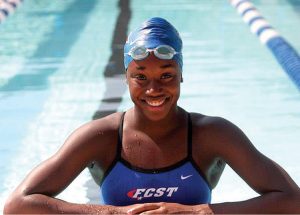 “Manuel’s win is so significant given the history of swimming and racial segregation in America. Swimming has an ugly past – black people were denied access to pools and pools were not built in black neighbourhoods. Even when swimming pools were made available, swimming was segregated, so that white people went to swim in private pools, and the public pools used by black people fell low down the list of municipal priorities. This history of discrimination has a knock on effect today – meaning parents who never learn to swim do not teach their children to swim. In the US swimming is not on the curriculum like it is in the UK.

Recently I attended a week-long creative writing event. The participants all got on extremely well. As I understood it, on a previous week, one person was troubled or maybe mentally ill. She went round saying to the others. “You hate me”. She said this to one particular person whose reply was memorable.  Her reply as it was reported to me was:

“I lived for 14 years in Belfast at the height of all the Troubles. I did not hate anyone then and I don’t intend to start now.”